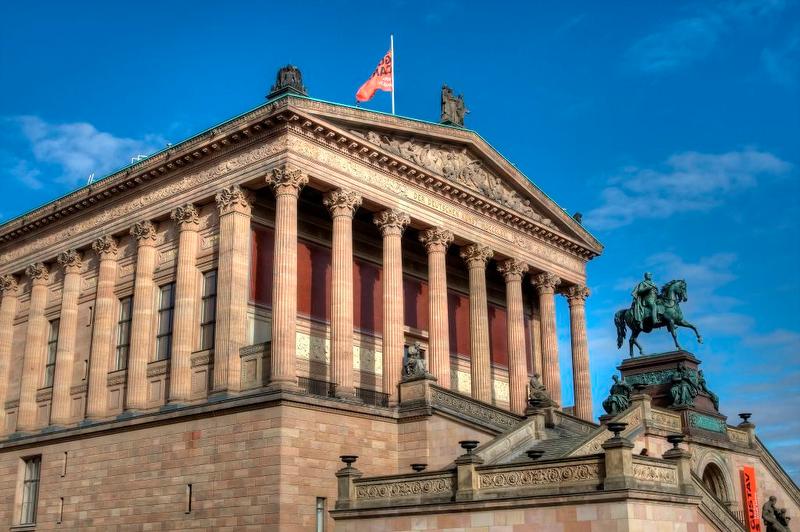 Art of the 19th century and exhibitions

There are masterpieces by Caspar David Friedrich, Adolph of Menzel, Edouard Manet, Claude Monet, Auguste Renoir, Paul Cézanne, Auguste Rodin, Anselm Feuerbach, Arnold Böcklin, Hans von Marées, Max Liebermann and Lovis Corinth. One of the highlights of the sculpture collection is the famous "Prinzessinnengruppe", the twin image of the princesses Luise and Friederike.

The imposing museum on the Museum Island presents 19th century art between the French Revolution and the First World War, between classicism and the Berlin Secession. Designed by Friedrich August Stüler, the building now houses one of the most beautiful collections of paintings and sculptures of the 19th century.

With astonishing imagination and fine colourism, Adolph Menzel's paintings, including important works such as the "Balcony Room" and the "Iron Rolling Mill", depict themes of Prussian history. Likewise, the sculptures of the 19th century include famous works such as the Princess Group by Johann Gottfried Schadow as well as numerous works by Berthel Thorwaldsen, Antonio Canova, Ridolfo Schadow, Reinhold Begas, Adolf von Hildebrand and Constantin Meunier. An extensive collection of Impressionist painting awaits you. Here you will see masterpieces by Edouard Manet, Claude Monet, Auguste Renoir, Edgar Degas, Paul Cézanne and sculptures by Auguste Rodin. Painting from the second half of the 19th century features works by Hans Thoma, Anselm Feuerbach, Arnold Böcklin, Hans von Marées, Wilhelm Leibl, Wilhelm Trübner and a large collection of paintings by Max Liebermann.

The art of the Goethe era

The art of the Goethe period is represented with portraits and landscapes, including works by Jakob Philipp Hackerts, Anton Graff. Also on display are works by the Nazarenes working in Rome by Peter Cornelius, Friedrich Overbeck, Wilhelm Schadow and Philipp Veit, who created an important commissioned work for the Casa Bartholdy in Rome with the frescoes on the Joseph Legend.

From Romanticism to Biedermeier

Special exhibition: My Liebermann - An Hommage

Co-founder of the Berlin Secession, collector, first naturalist, then impressionist: Max Liebermann (1847 - 1935) left his mark on art in Berlin and is one of Germany's most important painters. On the occasion of his 175th birthday, 22 works by the Impressionist can be seen in the Alte Nationalgalerie. Among them, for example, the "Flax Barn in Laren" (1887).

The imposing museum on the Museum Island presents 19th century art between the French Revolution and the First World War, between classicism and the Berlin Secession.

It is recommended to wear a FFP2 or medical face mask in all indoor areas of the museums.

The slot tickets allows entry to the museum for 15 minutes. Upon entry you are permitted to stay as long as you would like. Children and young people under the age of 18 are admitted free of charge. Please note that tickets cannot be cancelled.